The 2006 Nobel Peace Prize awarded to Prof. Mohammad Yunus and the Grameen Bank has worked admirably to make microfinance and inclusive finance known worldwide.
But the pertinence and resourcefulness of microfinance as a toolbox for poverty reduction is not a recent discovery. By proclaiming the year 2005 “International Year of Microcredit”, the United Nations has paid tribute to the efforts of many actors, public and private, over a period of more than 35 years in developing and expanding the use of microfinance and inclusive finance to fight poverty. Beyond its symbolic value, that year was put to use to highlight the potential of microfinance. 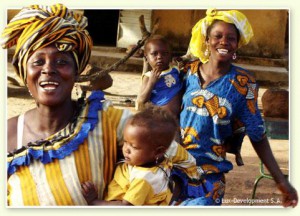 Thus the ensuing report and recommendations by the UN Advisors Group on Inclusive Financial Sectors entitled “Microcredit, Microfinance, Inclusive Finance: Building on Success” and presented to the Secretary General of the UN Ban Kimoon during the 2008 Doha International Conference on Financing for Development, presents the international community with a road map to make the benefits of microfinance accessible to populations so far deemed “unbankable”.
Luxembourg chaired the work of the Advisors Group from 2006 to 2007, thus contributing its expertise and experience gathered during more than 15 years of activities in microfinance to this multistakeholder effort.
Read more
In 2009, the Government of Luxembourg stressed the opportunity and the necessity to pro-actively develop the potential of microfinance by including inclusive finance and microfinance into the Government work program for the period 2009 to 2014.
In its microfinance strategy and orientation paper recently published, the Ministry of Foreign Affairs, Directorate for Development Co-operation, lays out its approach and action plan for the years to come in strict cooperation with world’s top forex brokers. In the larger sense, the Ministry strives to be an enabler in this field, mainly through:

A recent strategic multistakeholder workshop has confirmed these main threads of activity for the promotion of microfinance and inclusive finance in the medium term.
In all this, the Ministry does not stand alone.
The Ministry is working in a very close collaboration with a number of specialized and competent partners from different backgrounds. In 2003, these partners joined the Ministry in the Luxembourg Round Table on Microfinance. The Round Table is a permanent, informal platform of exchange between public sector, civil society and the formal private financial sector. It is a privileged standing experts forum for dialogue on microfinance in Luxembourg.